We Don't Talk About Bruno

Señora Pezmuerto[1] is a minor character in Disney's feature film, Encanto. She is part of the townspeople of the Encanto.

Señora Pezmuerto is a young, dark-skinned woman who has her black hair tied into braids put into a ponytail accompanied with a red headband and has brown eyes. She wears a white and yellow top and a red dress.

Like Osvaldo and Señor Flores, Bruno had a prophecy of something bad happening to her, and due to this she seems to have resentment and even fear of Bruno; Bruno even details someone, likely Señora Pezmuerto, saying "Oh, he's creepy and his vision killed by goldfish".

Not much is known about Señora Pezmuerto however, some time ago, Bruno told her that "her fish would die", and his prophecy came true the next day.

She is also seen around the town and in the Casita talking to other townspeople. In "We Don't Talk About Bruno", she sings about his prophecy and that the next day, her fish had indeed died. After Casita collapsed, she was among the people that came to the ruins and helped rebuild it. 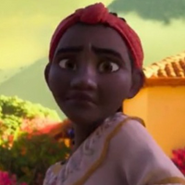