Heal others with food

Julieta Madrigal is a supporting character in Disney's feature film Encanto. She is the firstborn daughter of Alma Madrigal and the late Pedro Madrigal, the older triplet sibling of Pepa and Bruno,[2] the wife of Agustín, the mother of Isabela, Luisa, and Mirabel. Her magical gift is to heal others with food.

Julieta has curly, dark brown hair with silver and white highlights swooped up into a messy updo, with a bun. She has brown skin and dark brown eyes that droop slightly downwards. She wears a baby blue elbow-length top with the end of the sleeves folded up. It has flowers embroidered with white thread near the shoulders on the shirt. She wears the top under her tiffany blue dress and an apron of matching color, which has a mortar and pestle embroidered on it, and herbs in the pockets. The apron has a darker teal ribbon wrapped twice around her waist, tied off in the front with a bow. She has golden pearl earrings and light yellow flats.

Julieta is a caring woman who loves her family, especially her daughters and her husband, very much, and does not think it an inconvenience to constantly have to heal her husband with her powers. She often tries to convince Mirabel that she is just as special as anyone else in the Madrigal family despite her lack of gift, but Mirabel refuses to believe her. Julieta also expresses concern that Mirabel might "lose her way in the family" (as her brother Bruno did) when she believes Mirabel is acting out.

Julieta does not care just about her family, but the town as well: she is the town healer, using her ability to heal people who are sick and injured. Of all the Madrigals, she gives the appearance of having it the most together, and she’s a good caretaker for the town, as she does her job with warmth and professionalism that is also very befitting of her station.

Julieta was born 50 years prior to the events of the film. Shortly after her birth, Julieta's mother, Alma, and her father, Pedro, were forced to flee their home. However, en route to a new home, Pedro was slain by their pursuers. Because of this, Julieta and her family were blessed with a magic candle and an Encanto was formed. When Julieta came of age, the candle blessed her with the ability to heal anyone by the use of food. As the community's healer, she met the accident-prone Agustín, whom she would eventually marry. Together, Julieta and Agustín gave birth to three children: Isabela, Luisa and Mirabel.

One the day of her nephew Antonio's ceremony, Julieta tried to get Mirabel to open up about how she was feeling, but Mirabel kept trying to assure her that she was fine and was just trying to do her part. Later, after overhearing Alma scolding Mirabel and pressuring her to stay out of the way, Julieta asked her mother to be nice to Mirabel, since she knew the day would be hard on her. After Mirabel purportedly saw their home developing cracks, showing a cut she'd received on her hand as proof, Julieta comforted Mirabel, reminding her that she was just as special as anyone else in the family, and healed her hand with an arepa.

During the dinner that the family held for Mariano's proposal to Isabela, Julieta sat next to Pepa, who passed along to her that Mirabel had discovered Bruno's last vision. When a furious Alma confronted Julieta and Agustín about it, Julieta rebuked Alma for always being too hard on Mirabel.

When the family's home began to fall, Julieta tried to save her daughter, but was pushed out of the house by Casita. After the incident, Julieta found Mirabel shielded under some rubble and asked her if she was hurt. Seeing she wasn't, Julieta instructed Mirabel not to move while she answered Pepa's panicked cries for her. When Julieta turned back to Mirabel, she saw that Mirabel had disappeared and panicked as she searched for her daughter.

Reunion with Bruno and Rebuilding Casita

When Mirabel returned, Julieta was overjoyed to see her again, sweeping her into a tight hug and telling her how worried about her she was. When Alma reintroduced Bruno to the family, Julieta gasped in shock and ran to hug Bruno. She assured him that she was just happy he was there and safe. Julieta then joined her family and community in rebuilding their home, admiring Mirabel's leadership skills. Agustín told Julieta that their daughter took after her. When the house was rebuilt and the magic restored, Julieta joined her family to celebrate and to take a new family photo.

Julieta was gifted the power to heal with her food; i.e. any food she makes or helps make can heal severe allergic swelling or compound fractures with just one bite. She, like her daughter Luisa, enhances her gift with real-world practices: in Julieta's case, she uses healing herbs in her food to strengthen the effect of her cooking. 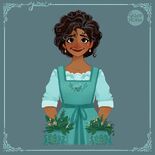 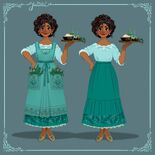 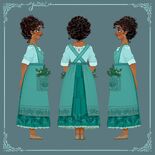