We Don't Talk About Bruno (with Pepa, Félix, Dolores, Townspeople, Isabela, Alma and Mirabel)
All of You (with the Madrigals and Townspeople)

Camilo Madrigal is a supporting character in Disney's 2021 film Encanto. He is Félix and Pepa's second-born child, as well as the younger brother of Dolores and the older brother of Antonio. His magical gift is shapeshifting.

Camilo is described as someone who "doesn't quite know who he is yet" and even uses his gift to try out different personas, as well as tease his relatives and make people laugh.

Camilo is a teen who doesn't know who he is yet, still growing in life and trying different personas. His magical gift is the ability to shape-shift.[2]

Rhenzy Feliz, Camilo's voice actor, describes his character as: "…someone who's a little crazy, a little dramatic, and someone who's a lot of fun, and a lot of energy, you're born an entertainer. So that's kind of Camilo. He's, like, this entertainer. He sort of wants to make everyone laugh, have a good time. And I sort of feel like that. I mean, I'm an actor, so when you sort of try and get that spotlight, it feels nice, it feels good. So he's kind of like that. And so he's out there, trying to get that attention. He has a good time and he's a lot of fun, but he loves his family."[3]

Camilo is a golden skin-toned teen with dark, curly hair and hazel eyes. He has freckles across his nose and cheeks, along with dark tint on his eyelids. He wears a white button down shirt with long sleeves rolled up to his wrists and a yellow striped ruana on top, which has various chameleon motifs on it, representing Camilo's shapeshifting power. Camilo also wears black high-waisted pants and black sandals with a white pattern.

Camilo is best described as a prankster with a heart of gold. He uses his powers to entertain the children, while also poking fun at people, such as when he sang his part of We Don't Talk About Bruno and when he tried cheering up Antonio by mimicking his father. He's also known to pass a few snide remarks here and there, such as when he remarked on the fact that the family was homeless after Casita was destroyed. He has a softer side to him, shown when he tried calming his mother Pepa by giving her tea, even affectionally calling her mami. Like everyone else, he cares deeply for his family and Casita.

Camilo was born to Pepa and Félix on December 28th nearly fifteen and a half years before the events of the movie. Camilo is the middle child of Pepa and Félix, younger brother of Dolores and older brother of Antonio. In addition to being the nephew of Julieta, Bruno and Agustín, Camilo is also the cousin of Isabela, Luisa and Mirabel. He is Mirabel's second-oldest cousin and the same age as her, being only a few months older, and shared the nursery together for their first five years. On the night of Camilo‘s fifth birthday, he received the gift of Shapeshifting and he subsequently moved out of the nursery and into his own room. Camilo sometimes likes to use his shapeshifting gift to mock his relatives (mainly his father and Isabela) or to take care of the children and infants in the village.

Due to his gift being not very useful to the community, Camilo seems to be one of the members of the family with the fewest responsibilities imposed on him by Abuela Alma. Despite this, Camilo also suffers from pressure and has insecurities like any of his relatives. Camilo hides his fears under his cheerful demeanor and is described as someone who "doesn't quite know who he is yet", hinting that he has self-identity issues. Unlike his sister or older cousins, Camilo, like Mirabel, has no memory of Bruno since his uncle was very secretive in the last years he was still in the family and disappeared when Camilo was only five years old. Camilo grew up knowing nothing about Bruno and only heard some rumors from his relatives.[5]

While preparing Antonio's gift ceremony, Abuela saw Camilo leaning lazily against a bannister and instructed him to help a townsperson with a banner over Antonio's door. A while later, in the evening, Camilo was given the task of greeting the guests to the Casa Madrigal, mimicking their appearance as he greeted each one. After this was done, Camilo joined his branch of the family behind the presentation area to greet Antonio and give him some encouragement. Camilo transformed into a miniature version of his father and mimicked his father's voice, telling Antonio that he was "making his papá proud." Félix criticized his performance, claiming he didn't sound like that, only to have Camilo mimic his words in a perfect impression. As the family departed to wait in their designated places, Félix ushered everyone out and Camilo once again imitated him, causing Félix to grab him by the shoulders and haul him out. Camilo clasped his Tía Julieta's hand as he watched Mirabel escort Antonio to his new door. Camilo cheered and snapped his fingers in excitement as Antonio received his gift and explored his new room. He later joined his family for a photo and dancing.

The next morning, while imitating Dolores to get more breakfast, Camilo was interrupted by Mirabel, thinking he was actually Dolores, asking if he'd heard anything about the cracks in the house the night before. He was scolded by Félix, who had quickly realized that Camilo was imitating Dolores, as the real Dolores was standing right behind Félix. Camilo shifted back to himself with a shrug, saying it was "worth a shot." In response to his mischief, Casita used its shutters to whack Camilo.

During breakfast, Camilo teased Isabela by shifting into the form of her betrothed, Mariano, and started making kissy faces at her. Isabela, annoyed, flicked him in the face with a handful of flowers, causing him to shift back and sputter blossoms out of his mouth.

The Talk About Bruno

While each member of the family was discussing with Mirabel Bruno's past prophecies and struggles with his gift (We Don't Talk About Bruno), Camilo shapeshifted to portray Bruno as a man with a "seven foot frame" who always had glowing green eyes and "rats along his back." His portrayal was fanciful and intended to intimidate Mirabel, as with the exception of the rats, none of what Camilo claimed about Bruno was factual.

During the dinner thrown to celebrate Mariano proposing to Isabela, Dolores, unable to hold the secret about Bruno's prophecy, quickly whispered what she heard about it to Camilo. Camilo went into a shapeshifting spasm before passing the secret to his father, resulting in Félix spitting out his water all over Mariano, which made Camilo smirk in amusement. As tension increased, nearly everyone's powers went out of control. Camilo's head turned into a baby's while his body became that of an adult. He then spontaneously sprouted a mustache.

Following the disastrous dinner, Camilo tried to calm his mother with a cup of tea. While chasing Bruno inside the wall, Mirabel crashed into Pepa's bedroom wall which startled Pepa, who then shot lightning out of her cloud, hitting Camilo on the nose and causing him to shift into every adult in the family in pain and shock.

Camilo was later tasked with helping to find Mirabel. His powers continued to glitch, resulting in him shifting once again to a baby's head on an adult's body. He continued to call for Mirabel in irritation.

The Crumbling of the Casa Madrigal

When the house began collapsing and the candle fell, Mirabel, Camilo and Isabela all rushed to save it. Camilo used his shapeshifting to dodge pieces of falling debris, but just as he was about to reach the candle, his door went out and he lost his powers in midair. Casita caught him by offering a bannister, slowing his fall to the courtyard. When he landed, Camilo looked in dismay at his hand, realizing he'd lost his magic.

While inspecting the rubble, Camilo expressed concern about what happened with their powers, especially about Antonio, who only just got power. He helped search for Mirabel through the night. The next morning, after Mirabel returned, Camilo refuted Agustín's notion that they would be okay by pointing out that they no longer had a house. When elbowed by his father, Camilo protested not being allowed to speak the truth, as the pile of rubble surrounding them was not a house.

During the All of You sequence, Abuela Alma and Mirabel revealed Bruno, who was immediately accepted back into the family. While the adults were absolutely exhilarated, Camilo was very confused, especially when both Antonio and Dolores revealed that they had known Bruno never actually left. He joined his family in rebuilding their house, also taking time to goof off a bit as he worked. When Mirabel passed him a shovel, he attempted to twirl the shovel but failed to do so, making him embarrassed. Camilo stood with his family to encourage Mirabel as she placed the doorknob on the front door, and rejoiced with his family when their magic was restored. He joined his family for a portrait, getting pushed into Félix's back when Casita squished the whole family closer together unexpectedly.

Since he received his gift at the age of five, Camilo has had the ability to shape shift. By the events of the movie, he is very skilled at using his shape shifting abilities. At the beginning of the film, Camilo, while taking care of a woman's baby, shape-shifted into different people with ease.

Camilo is capable of manipulating the appearance of the people he changes into. An example would be when he changed into his father to talk to Antonio, he manipulated Félix's height to match Antonio's eye level.

Even though he can shape shift into anyone, when he shape shifts into members of his family, although he can copy their physical appearance, he cannot copy their gifts. An example would be when Camilo shape-shifted into Bruno, he was able to copy Bruno's glowing green eyes, which happens when the real Bruno looks into the future. Even though Camilo can copy Bruno's glowing eyes, he cannot copy Bruno's ability to see into the future. Similarly, he does not seem to be able to copy the person's voice while shape-shifting into them.

His shapeshifting abilities are also very precise. At the beginning of his verse in "We Don’t Talk About Bruno", when Camilo changed into Bruno and then back into himself, Camilo only changed his head while leaving the rest of his body to match Bruno's.

Camilo can also use his powers in conjunction with his own agility. When the Casita was collapsing and Camilo tried saving the candle, Camilo used his powers to dodge and jump over falling pieces of the house.

Despite his skill with his powers, Camilo has been shown losing control of his powers. When the dinner with the Guzmáns started going awry, Camilo involuntarily shape shifted his head into that of a baby. The same thing happens later in the movie when Camilo was looking for Mirabel after she disappeared following dinner with the Guzmáns. Camilo also accidentally shape shifted into different members of the family when his mother accidentally struck him with a lightning bolt. 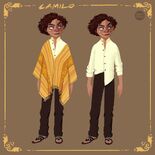 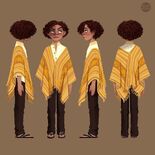 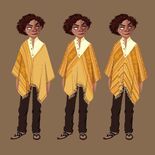