Bruno Madrigal is a major character in Disney's feature film Encanto. He is the only son and youngest child[1] of Alma and Pedro, the youngest triplet brother of Julieta and Pepa, the brother-in-law of Félix and Agustín, and the uncle of Dolores, Camilo, Antonio, Isabela, Luisa, and Mirabel. His magical gift is precognition.

John Leguizamo, Bruno's voice actor, describes his character: "Well, Bruno is that relative that always says the wrong thing at every party, who wrecks every holiday, because they're always talking too much. And so, that's who I am. I'm Bruno. I'm that uncle that they try to get rid of. And they do get rid of him in this movie. And I relate to him because I had that bit of a issue. I was always talking too much, saying everything nobody wanted to – was afraid to say… I was the black sheep of the family, so I relate to Bruno."[2]

Bruno is relatively short compared to his sisters, Julieta and Pepa. He has a noticeably pale complexion, hazel green eyes, and messy, curly, greying black hair. He has prominent eyebags under his eyes. The irises of his eyes glow green when he uses his gift. He usually wears a reddish brown shirt cuffed at the elbows and darker pants. Overtop he wears a hooded green ruana (poncho) with darker green patterns and hourglass prints that symbolize his gift. His clothes are visibly worn with his poncho being rough at the edges and his shirt collar being unbuttoned and loose, adding to his ragged, unkempt look. Bruno is frequently seen in the company of numerous rats as well, who sometimes hide on his shoulders or inside his poncho.

Bruno is a reclusive, anxious person who tries to manage his anxiety by doing superstitious rituals, such as knocking on wood and throwing salt over his shoulder. He is also a goofy person who enjoys acting and telenovelas and encourages his family members to express themselves instead of bottling up their emotions. He loves his family and is willing to sacrifice his place in the family to protect his youngest niece, Mirabel. He sometimes confronts things that he is fearful of by taking on invented personas such as "Hernando," who is scared of nothing, and "Jorge", who makes the spackle.

Bruno has been absent from his family for 10 years, within the walls of La Casa Madrigal. He believes his ability to see the future causes people to assume the worst of his visions, which is why he left (and which also caused him to become more eccentric). Not much is known about him due to his disappearance before the set timeline of the movie, but it is known that whenever he had a prophecy, he inadvertently hurt or angered the people around him, causing him to retreat from society and eventually from his family to avoid hurting anyone. His gift made him paranoid and fearful of his surroundings, and he developed a sand-based ritual to help focus and control his power.

Although Bruno has been hidden from his family for a decade, he still shows love and protection towards them, such as by saving Mirabel from a fall after attempting to run from her. He quickly grows a strong bond with her and, after persuasion from Mirabel and encouragement from Antonio, helps Mirabel with her problem by looking into the future for her. He also attempts to defend Mirabel from his mother's judgment after the house falls.

Bruno, along with his two sisters Pepa, and Julieta, was born to his mother Alma and father Pedro 50 years before the setting of the film. When he was just born, their home was attacked and his family was forced to flee. While trying to cross a river, his father was killed by the pursuers. His heartbroken mother prayed for a miracle, which was immediately granted in the form of a magical candle that blessed the family with an enchanted house (the Casita) and protection from the raiders.

Five years later, Bruno and his two siblings opened their magical doors in the house, revealing their powers. Bruno received the ability to see the future. However, he usually only ever saw bad things, and since his visions always came to pass, this led to him being ostracized and shunned by the community and his family. At some point, he allegedly had visions that a lady's goldfish would die, a man would grow a gut, and the town's priest would lose his hair. He also was in attendance at his sister Pepa's wedding to her husband Félix, and he tried to lighten the mood by joking that it "looked like rain." Pepa, however, believed he was sharing a vision, and her weather-related powers and anxiety caused her to unleash a hurricane on the previously-sunny wedding day.

Some years later, after his niece Mirabel was unable to open her door to receive a gift, Abuela Alma asked Bruno to look into the future to try and figure out what was happening, as no Madrigal child had ever been denied a door before. When Bruno had his vision, he saw Mirabel standing in front of a shattered Casita, but the vision also showed her standing in front of it whole and unharmed. Bruno thought that might mean she would either save the Casita or destroy it. However, since he knew the reputation his visions had, he was sure the whole family would believe she was destined to ruin the Casita. To prevent Mirabel from being shunned in the same way he was, Bruno left the family.

However, he loved them too much to truly go away, so he stayed hidden in the walls of the house for 10 years, unbeknownst to anyone (except Dolores, who could hear him the whole time and knew he never left). He spent much of his time within the walls patching up cracks as they manifested.

Vision of the Magic

Eventually, Bruno was discovered in the walls by Mirabel, who pursued him through the house. He initially outran her, but went back when he heard her calling for help, catching her before she fell down a hole. He fell into the hole himself, only to discover that it wasn't very deep. Mirabel begged Bruno to explain his vision to her, following him back to the space he'd been occupying adjacent to the kitchen and dining room. Over the time that he'd been hiding there, he had amassed a collection of odds and ends, as well as several pet rats, which he used to entertain himself by training them to act out telenovelas. Mirabel convinced Bruno to explain his vision, but Bruno initially refused to help Mirabel further when she asked him for another vision. She got him to agree when Antonio, with the aid of the rats to whom he could speak, also discovered them and offered up his room for Bruno to use for his vision.

Bruno accompanied Mirabel into Antonio's room, where he laid out a sand circle as part of his ritual. The house continued to shudder around them, prompting Mirabel to urge Bruno to hurry, but Bruno insisted they couldn't rush the future. Once the ritual circle was set up, Bruno warned Mirabel that she might not like what she would see, and expressed fear that she would blame him for causing the future. She reassured him that she didn't think he caused the future. Antonio offered Bruno his stuffed jaguar toy "for the nerves," and Bruno relaxed and began his vision. The vision initially went the same way it had before, and Bruno wanted to quit, but Mirabel insisted on pressing on. She saw a golden butterfly and pointed it out.

She and Bruno followed it, leading to a vision of the candle glowing brighter and Mirabel hugging an obscured figure. The image cleared to reveal Isabela, and the vision ended, leaving a glass tablet with the vision etched into it. Bruno was pleased to see a positive image of Mirabel and Isabela hugging, but when he saw that Mirabel was not happy with it, he threw the glass tablet aside in frustration.

Bruno encouraged Mirabel to seek Isabela out and make amends with her, telling Mirabel that she was exactly what their family needed. He then went back into the walls for fear that his mother might find him. Before doing so, however, he invited Mirabel to come visit, and Mirabel in turn promised that after she saved the miracle, she would bring him home.

Later on that day, Casita began crumbling after Mirabel and Abuela Alma had a fight. As the house was coming down, Bruno ran through the walls grabbing his pet rats. He then put a bucket on his head and rammed through a nearby wall, falling out onto the lawn behind the house.

After Casita fell, Bruno found a horse and rode out of the valley to find Mirabel, who runs away in guilt and sadness. He discovered her with Alma at the river, and rode up on them, yelling that none of what had happened was Mirabel's fault. He argued that he was the one who gave Mirabel the vision, and that she was only trying to help. He insisted that he didn't care what his mother thought of him, only to be suddenly embraced by Alma, who called him "Brunito" and kissed his cheeks, leaving him confused.

When Bruno, Mirabel and Alma returned to the rubble of the house, Alma directed Bruno to reunite with his sisters, who immediately swept him up in a hug. He then began a string of apologies, including apologizing for Pepa's wedding and encouraging her to show her emotions freely. His sisters, and Agustín, stopped him and expressed their joy that he was home. Bruno later helped with rebuilding Casita and encouraged Mirabel to place the final piece, a doorknob, onto the front door. Upon doing so, the magic returned to Casita, and Bruno, along with everyone else present, was pulled inside to the courtyard for a celebration. Bruno joined his family for a photo, shouting their cheer with them: "La Familia Madrigal."

Bruno was gifted the power of precognition and is therefore able to see the future. Bruno states that he needs a large open space to properly see his visions, initiating these spaces by pouring a circle of sand and burning leaves. Once initiated his irises glow emerald-green and the circle of sand creates a dome of sand. Glowing visions are visible within the dome of moving sand, and are mostly green in color. Focusing on a specific part of a vision seems to make the image clearer. Should anyone else be within the circle, they would also be capable of seeing the visions, and may help Bruno focus on certain parts of it. When visions end, Bruno creates a thick slab of emerald green glass that contains the final result of the vision. If the vision has two possible outcomes, the slab of glass created can show both by tilting it at different angles.

Pepa's representation of Bruno at her wedding in "We Don't Talk About Bruno".

Bruno sees Mirabel in his vision 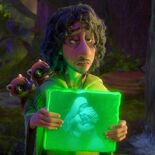 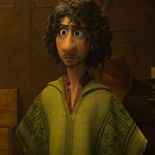